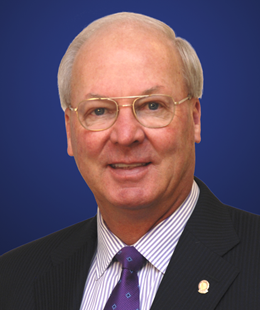 Gen. Craig R. McKinley is currently the Chairman of the ANSER Board of Directors. He was appointed National Chair of Employer Support of the Guard and Reserve on July 1, 2017. He retired as President and CEO of the National Defense Industrial Association (NDIA) on June 30, 2017. McKinley came to NDIA from the Air Force Association (AFA), where he had served as President since October 1, 2012.

After 38 years in the Air Force, McKinley retired as a four-star general in November 2012. His last assignment was as the Chief of the National Guard Bureau, where he also served as a member of the Joint Chiefs of Staff. In this capacity, he was a military adviser to the President, the Secretary of Defense, and the National Security Council and was the Department of Defense’s official channel of communication to the Governors and to State Adjutants General on all matters pertaining to the National Guard.

McKinley received his commission in 1974 as a distinguished graduate of the ROTC program at Southern Methodist University. He has served in numerous assignments in flying and operations, as well as command positions at group, wing, sector, and field operating agency levels. His assignments include Commander, 1st Air Force, Air Combat Command; and Commander, Continental U.S. North American Aerospace Defense Command Region, Tyndall Air Force Base, Fla. He has served as the Assistant Deputy Chief of Staff for Plans and Programs, Headquarters U.S. Air Force, Washington, D.C., and Director, Mobilization and Reserve Affairs Directorate, U.S. European Command, Stuttgart-Vaihingen, Germany. McKinley is a command pilot with more than 4,000 hours, primarily in the T-38, F-106, F-16, and F-15. Additionally, he has been pilot in command in the C-131 and C-130 operational support airlift aircraft.

McKinley graduated with a bachelor’s degree in business administration from Southern Methodist University in 1974 and received his master’s degree in management and economics from Webster College, St. Louis, Missouri, in 1979. He completed studies at the National War College, National Defense University, in 1995. McKinley and his wife, Cheryl, reside in Arlington, Virginia.