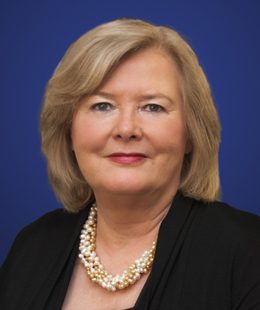 Joanne O. Isham is currently an independent consultant working with a variety of clients in the defense and intelligence sectors developing strategies, identifying high-value opportunities, addressing critical challenges, and transforming their business. She was formerly a Senior Vice President for L-1 Identity Solutions, a market leader in identity management, responsible for planning, developing, and executing L-1’s federal market strategy while contributing to international, state, and local market execution plans.

From 2007 to 2008, Ms. Isham was the Chief Operating Officer of High Performance Technologies, Inc. (HPTi), where she had management and operational responsibility for the firm. HPTi specializes in computational science, enterprise technology and planning, systems architecture and engineering, secure software development, and knowledge discovery and visualization.

Previously, Ms. Isham was the Vice President/Deputy General Manager of Network Systems at BAE Systems. In addition to managing day-to-day operations, she was directly responsible for identifying strategic opportunities for new mission focus within the Intelligence Community, Department of Defense, and Department of Homeland Security.

Prior to her work at BAE Systems, Ms. Isham was a member of the Senior Intelligence Service and a career officer at the Central Intelligence Agency (CIA). From September 2001 until her retirement in 2006, she served as Deputy Director of the National Geospatial-Intelligence Agency (NGA). Prior to that assignment, she served as Deputy Director for Science and Technology at the CIA, serving as the principal executive overseeing the CIA’s scientific and technical program, with particular responsibility for clandestine technical activities and Agency research and development. Ms. Isham also served as the CIA’s Associate Deputy Director for Science and Technology, the directorate’s second most senior position.

Ms. Isham has held several other senior management positions in the CIA and other Intelligence Community organizations, including service as the Director of Congressional Affairs for the Director of Central Intelligence, overseeing the CIA’s congressional and legislative interests. She also served as the Deputy Director of the Resource Management Office of the Community Management Staff (CMS) and as CMS’s Director of Program Analysis. In these positions, she oversaw budget and resource issues spanning the entire Intelligence Community. She also spent a number of years on assignment to the National Reconnaissance Office as Director of Legislative Affairs, a program monitor for National Programs, and a program manager.

Ms. Isham is a member of the Senior Advisory Group for the Director of National Intelligence; the Board of Trustees for Analytic Services Inc.; the Board of Directors for Applied Analysis; INSA; and the Open Geospatial Consortium.

Ms. Isham is a graduate of the University of Notre Dame.